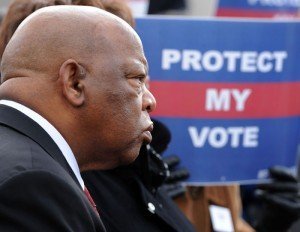 America has a long history of passing legislation designed to protect and empower African Americans, then turning its back on that legislation, especially where the right to vote is concerned.

Reconstruction Legislation:
The 13th Amendment, ratified December 6, 1865, made slavery illegal in the United States, but it lacked the power to prevent the southern states from creating de facto slavery in the form of sharecropping, which kept freed slaves poor and subservient to rich white men, and silent at the ballot box.

The first Civil Rights Act, vetoed by President Andrew Jackson but overridden by Congress in April 1866, granted citizenship, but not the right vote, to all persons born in the U.S.

The 14th Amendment, ratified July 9, 1868, not only supported the Civil Rights Act but also promised equal protection under the laws, yet, the amendment neither stopped the South from enacting Jim Crow laws nor prevented the U.S. Supreme Court, in the Plessy vs. Ferguson decision, from allowing these racism-based laws. (See my blog post “Separate & Not Equal | Black Citizens Do Not Receive Equal Legal Protection” published June 12, 2015)

The 15th Amendment, ratified February 3, 1870, granted African American men the right to vote, but it did not stop the South from passing several voter discrimination laws.

1960s Civil Rights Legislation:
Disenfranchisement remained rampant. The 24th Amendment, ratified in January 23, 1964, banning poll taxes nationwide, attempted to right the persistent wrong but applied only to national elections and did not adequately protect voters’ rights for these elections.

The 1965 Voting Rights Act:
On August 6, 1965, some four months after police attacked more than 500 non-violent civil rights marchers attempting to walk from Selma to Montgomery, Alabama in order to demand the right to vote, President Lyndon Johnson, signed the Voting Rights Act. Its intent was to stop discrimination based on race, color, national origin, religion, and gender. The act was renewed and extended, coincidentally, by four Republican presidents, Richard Nixon in 1970, Gerald Ford in 1975, Ronald Reagan (reluctantly) in 1982, and George Bush in 2006. Nonetheless, several states, especially in the South, objected to provisions of the act and found creative means to get around them, including altering district borders, limiting registration sites, prohibiting early voting, reducing voting hours, and requiring photo IDs.

The 21st Century:
The Federal Standards and Procedure Act (The Help America Vote Act):
It is ironic that following the 2000 election, in which almost 2 million ballots–a significant number of them in African American communities–were disqualified because of unreliable methods and procedures, President George Bush signed HAVA on October 29, 2002.

Shelby County vs. Holder
In June 2013, civil rights leader and 26-year-veteran congressman John Lewis of Georgia was heartbroken and dismayed when he heard that the Supreme Court had struck down Section 4 of the civil rights law. This provision designated which jurisdictions, based on their histories of voting discrimination, were required to get prior approval of any changes to their voting laws. Lewis said the court had “stabbed the Voting Rights Act of 1965 in its very heart…These men that voted to strip the Voting Rights Act of its power, they never stood in unmovable lines, they never had to pass a so-called literacy test… It took us almost 100 years to get where we are today. So will it take another 100 years to fix it, to change it?”

This ultra-conservative Supreme Court had, in effect, invited a new onslaught of voter suppression, allowing Republican-controlled states to put in place impediments explicitly designed to deny suffrage to minorities and poor people, who were likely to vote for Democratic candidates. Like Representative John Lewis, I, too, was heartbroken and dismayed.