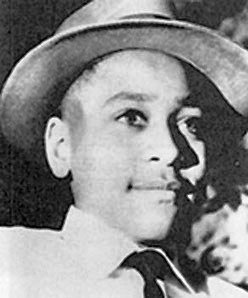 He whistled at a white women. A few days later, in the summer of 1955, his mutilated body floated, feet first, to the surface of the Tallahatchie River. Emmett Till was 14 years old.

That was 60 years ago. No one has ever been held accountable for Emmett’s kidnapping, torture, and murder.

A Youth From the North In Jim Crow South
Emmett had left his home in Chicago on August 20, 1955 to visit cousins in Money, Mississippi. He arrived the following day, unfamiliar with the mores and dangers of the Jim Crow South. He probably did not know that there had been nearly 500 documented lynchings in Mississippi, nor did he know what had incited them. He was a fun-loving, brash young man, so on August 24, when he saw Carolyn Bryant, an attractive 21-year-old white woman, he whistled.

A few nights later, Emmett was awakened by someone pounding on the door to his uncle’s home. Carolyn’s husband Roy Bryant, accompanied by his half-brother J.W. Milam, walked into the bedroom where Emmett was lying and ordered him to get up and get dressed. The intruders took him to a barn far away from town, where, after hours of pistol-whipping him, J.W. ordered Emmett to strip naked, then shot and killed the youth. J.W. and Roy used barbed wire to strap a 70-pound cotton gin fan to the dead boy’s neck, then dumped the body into the Tallahatchie.

Emmett Till’s Lynching Awakens America
Local authorities wanted to bury Emmett’s body—and the evidence of what had been done to him—in Mississippi, but his mother, Mamie Till-Mobley, demanded that her son’s remains be brought home to Chicago for an open-casket funeral. She wanted the world to see the evils of racism.

Thousands of mourners lined up to pay their respects at the funeral. Hundreds of thousands Americans saw the shocking photographs of Emmett’s disfigured face in Jet magazine, and knew they could not remain silent.

Justice Not Served
In September 1955, Bryant and Milam were arrested, but an all-white jury quickly acquitted them of murder, and a grand jury refused to indict them for kidnapping. Months later, in a Look magazine article, Bryant and Milam described Emmett’s the torture and murder. They knew that the “Double Jeopardy Clause” of the Fifth Amendment protected them from being re-tried for the same crime.

Over the years, new evidence revealed that Roy Bryant and J.W. Milam did not act alone. In 1996, African-American filmmaker Keith Beauchamp, outraged that no one was ever punished for Emmett’s death, became determined to see justice done. He spent nine years studying documents and talking to dozens of witnesses and family members. He was able to identify at least 14 men who may have been involved in the kidnapping and murder. At least 5 of them were black.

Why would a black man participate in such a appalling act against a black child? This question was answered in a recent interview with Emmett’s cousin Simeon Wright: “Everything [is] based on fear. If you can instill fear in the hearts of a group of people, you can control them.”

New Evidence: There Were Many Accomplices
Beauchamps’s research, featured in the 2005 documentary, “The Untold Story of Emmett Louis Till,” helped spur the Justice Department to re-open the case. FBI agents learned new details from witnesses who had been afraid to come forward in 1955. And when Till’s body was exhumed, investigators put to an end the notion that the lynching was a hoax and that the NAACP had planted some other boy’s body in the river.

A Long Tradition Of Racial Violence
Emmett’s lynching helped spark the civil rights movement and the ongoing debate over racism in America. Historian Lonnie Bunch stated, “I think that the story of Emmett Till reminds us that America is a nation that has had these horrible moments and that these moments haven’t just happened. There’s a long tradition of violence in this country, racial violence and we have to remember that in order to confront it.”