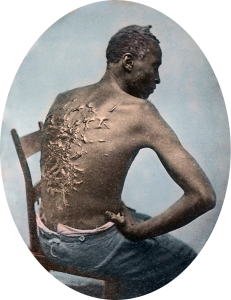 His name was Gordon. He was a runaway slave from a Mississippi plantation. Gordon smeared his body with onions to confuse the pursuing hounds and slave catchers. Then he escaped through the swamps and bayous to the sanctuary of the Union army in Baton Rouge, Louisiana.

What made Gordon unforgettable was a photograph of his hideously lash-scarred back. The photograph and Gordon’s story appeared in New York’s Harper’s Weekly Magazine on July 4, 1863.  Abolitionists circulated the photo titled, “The Scourged Back,” which told the story of the inhumanity of slavery in one picture far more clearly than the thousands of words in antislavery pamphlets.

The 13th Amendment abolished slavery, and the 14th and 15th Amendments granted citizenship and civil rights to former slaves. What followed, however, was not a pretty picture in American history. Jim Crow laws, segregation, and shocking black and white photos of lynchings littered the landscape of American racial consciousness for almost 90 years.

According to James Allen’s Without Sanctuary: Lynching Photography in America, during many public lynchings, professional photographers took pictures and produced postcards to sell as souvenirs.  The Tuskegee Institute recorded the lynchings of nearly 5,000 black Americans between 1882 and 1968, probably only a small percentage of the actual number.

Throughout this time, the police were active participants in enforcing segregation and stifling dissent. That, too, was chronicled, in photography and news film of the civil rights struggle. Footage of firemen hosing down black demonstrators, and police charging peaceful, well-dressed marchers helped galvanize public support for the civil rights legislation of the 1960s.

Yet, some 30 years later, the videotaping of four Los Angeles policemen beating Rodney King III, a black taxi driver, again outraged the public. The outrage, however, was not, in the view of many, translated into justice. The police were acquitted, and the 1992 Los Angeles riots ensued.

Today’s cell-phone cameras play a similar role in focusing public awareness on how police treat black citizens. Just Google “videotaped police brutality,” and see the 4,160,000 results. This one was taken on May 25, 2020:

His name was George Floyd.