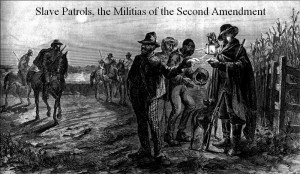 I live in a Boston suburb with few non-white residents. One evening, police pounded on our door, demanding we explain our presence in the community they were charged to protect. My husband helped them come to an “understanding” – We are part of that community. Though the understanding remains in place for us, police have stopped black visitors on their way to my home, requiring them to identify their destination.

Virtually at the very moment slavery took hold in America, blackness became associated with criminality. More than breaking the law, blacks accused of crimes were defying the racial hierarchy. Appeasing the fear of black revolt and keeping human property in their place, the Slave Codes legalized brutality.

In the 17th century, slave patrols, or plantation police, emerged throughout the South. Their mission was to stop black criminality before it became insurrection. Patrollers hunted down on-the-loose slaves, then beat, shot, whipped, slashed, or maimed the men, and raped the women.

The outcome of the Civil War was the ultimate threat to the old social order. During Reconstruction, white supremacists, ignoring the written law with impunity, threatened, assaulted, and murdered blacks trying to assert their newly acquired constitutional rights.

After the demise of Reconstruction, Jim Crow laws, seeking to resurrect the antebellum social hierarchy, bolstered the criminalization of blackness.

During the 20th century’s Great Migration of African-Americans from the South, the notion of the rebellion-crazed rural slave morphed into the image of the violence-prone, black urban criminal. And slave patrollers and Klansmen mutated into status-quo-protecting northern vigilantes, policemen, and judges.

The 1960s’ Civil Rights Movement was scary to those wanting to hold on to the “good ol’ days,” and the 21st century election of Barack Obama was the greatest threat of all.

Even as Obama sits in the Oval Office, police killings of black men reveal the immutability of the association of blackness with criminality. Black people are criminals and deserve harsh treatment. When the New York Times stated Michael Brown was “no angel” because he snatched cigars from a local store, the reporter was implying this unarmed black man deserved to die. The blog “That Devil History” aptly sums it up: “[Michael was] one less slave to foment rebellion; one less thug to poison the streets.” And, apparently, Minneapolis Police Officer Derek Chauvin thought George Floyd deserved to die.