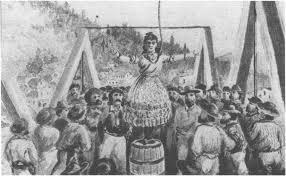 Hushed-up Lynchings
During the Jim Crow era, the lynching of African Americans throughout the South was so widespread and so well publicized that it was hard to ignore. Newspaper reporters were among the many spectators, and photographers snapped pictures for the postcards they would sell. Though rare, history teachers, briefly and cautiously, mentioned the lynching of black people. But the second most frequent target of mob violence was avoided by those who report news events, by those who made postcards in order to capitalize on vigilante murders, and by those whose job it was to educate America’s young people. From the mid-19th century until well into the 20th century, mobs lynched thousands of Mexicans, not only in states bordering Mexico but also in those well north of the border, including Nebraska and Wyoming. These lynchings were hushed-up, in part because the communities in which the murders occurred did not want it widely known that local authorities and deputized citizens played conspicuous roles. Lynching was not always by people on the margins of a community, and it was not a not a southern peculiarity.

Josepha, The Only Woman Lynched in California
One of few the lynchings of Mexicans to reach public record was that of Josepha Segovia, the only woman ever lynched in California. In many accounts her name was changed to “Juanita,” a stereotypic Mexican name, and there are several discrepancies in the reports about who she was and about the circumstances leading to her 1851 lynching in Downieville, California. Josepha was a petite woman in her twenties. In some accounts she was a  well-respected citizen. In others, in keeping with the Gold Rush era’s American view of Mexican women, she was a “depraved, sexually promiscuous” saloon girl with a vicious temper.

Accused of stabbing a white miner to death, Josepha was brought to trial on July 5, 1851. In some reports, he had broken into her house, presumably to rape her; in others she had invited him in. In one story, Josepha murdered her victim by hiding shards of glass in his food so that she could steal the gold he had mined.

As soon as the guilty verdict was announced, vigilantes erected a scaffold on the bridge over the Yuba River, and some 2,000 spectators gathered to watch Josepha’s hanging.

William L. Manly inadvertently helped  turn Josepha into a legend when he wrote: “Juanita went calmly to her death. She wore a Panama hat, and after mounting the platform she removed it, tossed it to a friend in the crowd…with the remark, ‘Adios, amigo.’ Then she adjusted the noose to her own neck, raising her long, loose tresses carefully in order to fix the rope firmly in its place; and then, with a smile and wave of her hand to the bloodthirsty crowd present, she stepped calmly from the plank into eternity… “

Lynchings in The 21st-Century
With today’s resentment of the increasing Latino population in the U.S., and the heated debate over immigration policy, the history of anti-Mexican violence makes clear that racial hatred does not endanger African Americans alone, nor does it have geographic boundaries. Nor does it exclude children.

On October 22, 2013, thirteen-year-old Andy Lopez was walking across a vacant lot in Sonoma, California, carrying an airsoft gun. Two police approached him from the rear. One fired eight shots, four of which hit Andy from behind. The officers then handcuffed the dying child. Later, the district attorney did not charge the shooting officer, concluding that his behavior was “a reasonable response.”

One year and one month later, on November 22, 2014, two police officers shot and killed twelve year-old Tamir Rice as he played in a park in Cleveland, Ohio. One of those officers has been charged with murder.

Lynchers now use guns instead of ropes.

Posted in Racism In America, Women.