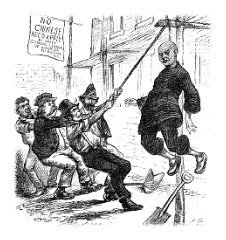 October 24, 1871, in Los Angeles, California’s Chinatown, a mob of more than 500 white men forced its way into, then ransacked, every building on Calle de los Negros (dubbed “Nigger Alley” after the dark-complexioned Californios—Spanish-speaking, mixed-race Californians—who had originally lived the area).  Most in the mob had been recruited off the streets by a high-ranked policeman. Many of the Chinese immigrants living and working in the crime-ridden ghetto were robbed and beaten. Seventeen were tortured, mutilated, and then hanged at several sites in the business section of the city. A cheering crowd looked on.

Causes
This mass lynching, which became known as the Chinese massacre of 1871, had been festering for decades. During the California Gold Rush (1848-1855), Chinese miners flocked into the state and became rich. Those who did not become wealthy were willing to work wherever they could for a fraction of the pay expected by Anglo laborers. Resentment loomed large from both the white mine owners and the white work force. The Anglo population feared that the Chinese, though not allowed to vote, would soon control California. Because of its alien religion and alien culture, and because of its willingness to work long hours for little pay, the Chinese population was viewed as the “yellow peril.” To keep this peril at bay, California’s Legislature imposed a foreign miner’s tax and passed a law that forbade any Chinese from testifying against a white man. So, Los Angeles citizens could freely ignore the rash of vigilante murders that followed. No lynchers were ever prosecuted.

Throughout the American Civil War, most white Californians were openly supportive of the Southern cause. After the war, the unemployment rate soared throughout the western states, exacerbating the anti-Chinese sentiment.

The Trigger
The 1871 massacre was triggered by the accidental shooting-death of a white saloon owner, caught in the cross-fire of a gun battle between two Chinese factions. The fight started after a Chinese company kidnapped a beautiful woman married to a man affiliated with a rival Chinese company.

Aftermath
Though the ransacking and lynchings were carried out primarily by hoodlums, their success depended on the tacit complicity of the town’s elite. The legal and news cover-ups were unparalleled. Only ten rioters were brought to trial. Eight were convicted of manslaughter (not murder), but their convictions were overturned on a legal technicality: The prosecuting attorney had not proven that one of the victims was dead. It seems more than coincidence that this attorney was incompetent, while the defense was mounted by one of the nation’s leading lawyers. Moreover, the presiding judge had not passed the bar.

City leaders were determined to attract a rail link that could, and did, bring thousands of Anglos–and their money–to Southern California, so Los Angeles newspapers downplayed the massacre as a spontaneous eruption of anger toward a broadly despised minority. The press did not mention the lynchings in its year-end review of the town’s major events. The rest of the nation, including the railroad owners, knew little.

As John Johnson Jr. states in his 2010 LA Weekly article “How Los Angeles Covered up The Massacre of 17 Chinese:”

The massacre did have one salutary effect, however: It brought an end to the rule of the rope in Los Angeles. The Chinese were the last to be lynched in L.A…

And still today, every so often, the rainbow mix of populations in Los Angeles forsake their surfboards, convertibles, Cinco de Mayo celebrations and Martin Luther King Jr. Day marches and rise in revolt against each other’s accursed presence in this paradise. http://www.laweekly.com/news/how-los-angeles-covered-up-the-massacre-of-17-chinese-2169478

And police shootings of  Los Angeles’ minorities are certainly not rare.