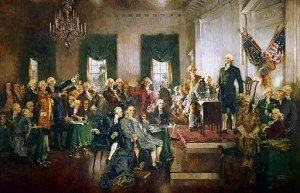 “The Signing of the Constitution”

There was a little rain on May 25, 1787, when the Constitutional Convention opened in burgeoning port city of Philadelphia. The sessions convened in elegant Independence Hall, and though George Washington chaired, James Madison became known as the “Father of the Constitution.” Madison presented the fundamental blueprint for the new nation, took copious notes on every discussion, and, of the fifty-five delegates, was the only one to attend every session.

On September 17th, after one hundred days of often contentious debate, the twelve state delegations (Rhode Island did not send a representative) approved the Constitution, and thirty-nine of the forty-two delegates present signed. The 4,440 words of the Constitution begin:

We the People of the United States, in Order to form a more perfect Union, establish Justice, insure domestic Tranquility, provide for the common defence, promote the general Welfare, and secure the Blessings of Liberty to ourselves and our Posterity, do ordain and establish this Constitution for the United States of America.

The “people” to whom the Constitution promised “the Blessings of Liberty” were painstakingly defined by whom it excluded in Article I, Section 2, Clause 3:

Representatives and direct Taxes shall be apportioned among the several States which may be included within this Union, according to their respective Numbers, which shall be determined by adding to the whole Number of free Persons, including those bound to Service for a Term of Years, and excluding Indians not taxed, three fifths of all other Persons.


Thus the nation’s founding document officially marginalized the indigenous people and the forcibly imported people. Before James Madison proposed the Three-fifths Compromise, the issue of slavery threatened to tear apart the newly formed union. The southern states wanted every slave to count towards their numbers of delegates in the House of Representatives, but the North would not grant power-by-numbers to the South. Elbridge Gerry of Massachusetts questioned: “Why should the blacks, who were property in the South, be in their rule of representation more than cattle and horses of the North?”

Everyone at the convention knew that “blacks” were vital to the nation, so Madison’s proposal passed. But nowhere in the Constitution do the words “slave” or “slavery” appear.