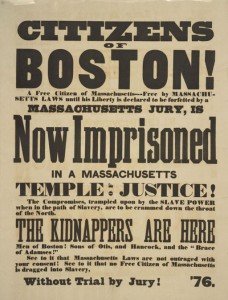 The Constitution made sure that slaves could not find freedom by escaping to a state in which slavery was not practiced. Article IV, Section states:

Toward the end of the Constitutional Convention, South Carolina delegates Charles Pinckney and Pierce Butler insisted that fugitive slaves be “delivered up like criminals.” James Wilson of Pennsylvania objected, arguing that the provision “would oblige the Executive of the State to do it at public expence.” And Roger Sherman of Connecticut stated that he “saw no more propriety in the public seizing and surrendering a slave or servant, than a horse.” The proposal was dropped. But the very next day, Butler presented a small but significant change of language, rendering it palatable to every delegate present. By changing the phrase “legally held to service or labour in one state” to read “held to service or labour in one state, under the laws thereof.” The revision implied that it was the laws of some states, not the Constitution itself, that legally sanctioned slavery in the new nation. As in the other statements in the Constitution dealing with enslaved people, the words “slave” and “slavery” are not used, but this clause, in effect, makes slavery a protected institution.