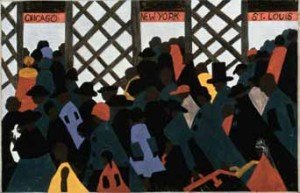 The Great Migration
by Jacob Lawrence

Wars bring economic and social change. For African Americans, the Civil War brought emancipation and the broken promise of “40 acres and a mule.” World Wars I and II brought about a vast migration of black southern sharecroppers to the industrial north and to a new set of broken promises.

From 1915 until about 1940, five to six million African Americans, searching for freedom and economic security, left family, friends, and close-knit communities. Anonymity in large cities like Chicago, New York, and St. Louis did offer them more personal freedom.  And, yes, the work they found paid more than sharecropping, but the economic security promised by recruiters (who came south and were frequently paid by the head for each worker) was mostly fiction. As historian Spencer R. Crew states in The Great Migration of African Americans, 1915-1940, the migrants “typically wound up in dirty, backbreaking, unskilled, and low-paying occupations.”

While the press, factory owners, railroad companies, and job recruiters promised plentiful jobs, northern labor unions excluded African-American men and threatened to boycott or strike any company hiring African Americans. Until 1925, there were no recognized all-black unions, so black workers were powerless to retaliate.

Black men served with distinction in both  world wars, but some found ways to avoid the draft and to step into higher paying jobs. Once, however, the wars ended and white male workers returned, African Americans usually had to relinquish those jobs.

Compounding the economic uncertainty was the cost of living. Landlords took advantage of the black immigrants, who, to make ends meet, took in boarders, making living conditions even more crowded and squalid. Thus began the cycle of inner-city ghetto poverty that many African Americans still endure.

As job opportunities dried up during the Great Depression, the Great Migration came to an end. What had appeared to be a means of escape from racism and economic repression in the South turned out to be a bait-and-switch scam, not unlike today’s political reality and the campaign promises it shatters.