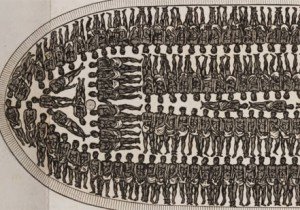 In the decade before the Constitutional Convention, some Virginia plantation owners inventoried their human property and, discovering a surplus, began to sell slaves to other colonies. This internal slave trade was so profitable that slave-breeding and selling became a popular business. These Virginia entrepreneurs recognized that stopping the influx of foreign-born slaves would increase the value of those born on American soil. But for the nation as a whole, the African slave trade was essential. Southerners wanted assurance that there would be a steady supply of slaves. And New England shipyards built the ships that transported slaves and the products of slave labor. Northerners captained and manned these ships in order to financially support their families. So, the framers of the Constitution saw to it that the slave trade could not be interfered with for twenty years and that there was a cap on the amount of tax that could be levied. Article I, Section 9 states:

The Migration or Importation of such Persons as any of the States now existing shall think proper to admit, shall not be prohibited by the Congress prior to the Year one thousand eight hundred and eight, but a Tax or duty may be imposed on such Importation, not exceeding ten dollars for each Person.

And should Congress have a change of heart and want to amend Section 9, the lucrative and economically vital slave trade was further protected in Article V:

Provided that no Amendment which may be made prior to the Year One thousand eight hundred and eight shall in any Manner affect the first…Clause[s] in the Ninth Section of the first Article;