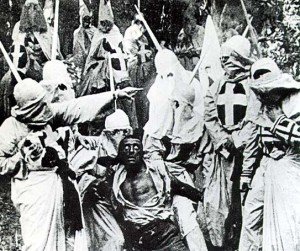 On February 8, 1915, the blockbuster movie spectacle of The Birth of a Nation appeared on the silver screen, awing millions of white Americans. An on-screen title claims: “This is an historical presentation of the Civil War and Reconstruction, and is not meant to reflect on any race of people today.”

To the contrary, the film is a three-hour melodramatic presentation of intense racism disguised as history and displayed in groundbreaking cinematography.

With another screen title, the viewer soon learns what will become the film’s underlying tension: “The bringing of the African to America plants the first seed of disunion.”

The resolution to the problems that sprouted from that seed is none other than those night-riding protectors of the white race, the Ku Klux Klan. “Heroic” and strangely garbed, they organize and then go about correcting the wrongs of Reconstruction and the Freedman’s Bureau, which the movie characterizes as “the charity of a generous North misused [by carpetbaggers] to delude the ignorant.”

The problem with the movie was that it was well made and popular. President Woodrow Wilson loved it because it supported his own writings about the failures of Reconstruction. The movie jump-started Hollywood and made so much money it was impermeable to NAACP protests.

The NAACP was right. The racism and negative stereotypes in almost every scene were, and still are, painful, enraging, and deeply offensive to African Americans. Portrayed as fawning supplicants to the kindly master’s largesse, black characters (Many are easy-to-spot black-faced Caucasian extras, giving the film an aura of a weird minstrel show) bow and scrape, dance and clown, only to be led astray by evil northerners. 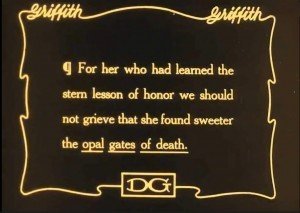 “Birth of A Nation:” Flora’s suicide

The most threatening character, in the eyes of white movie-goers, is a freedman, Gus, who proposes marriage to a white woman, Flora. Terrified and appalled, she flees into the forest, the black man in pursuit. Trapped on the edge of a precipice, Flora threatens to jump if he comes any closer. When he steps toward her, she leaps to her death.

So, The Birth of A Nation planted its own seed of racism in American film making. It was the most popular film ever made until the 1939’s Gone With the Wind spurred on the Hollywood tradition of bigger-than-life racism on the silver screen. And what about 21st century movies?