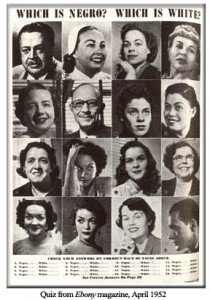 Which Is Black? Which Is White? Passing? (Ebony Magazine, April 1952)

For Americans whose skin color is any shade darker than pinkish, “inconvenience” is a euphemism verging on ridiculous understatement.

The African slave trade laid the foundations for American racism and for Americans paying so much attention to skin color. The Africans’ dark skin became the foremost symbol of subservience. Later, skin color was quite inconvenient for both escaped slaves and freedmen, long before and long after the Mason-Dixon Line demarcated the regions of our country that would eventually fight a civil war over what boiled down to the enslavement of black people.

Then there was the pathetic consolation of unrepentant Confederates: though many fought and died to preserve slavery, few owned slaves. But the Confederates’ white skin served them well in a segregated society that would endure legally until the 1960s and virtually to today.

Between the Jim Crow and Civil Rights eras, many mixed-race Americans had enough of the mix to “pass” for white and enjoy the convenience and anonymity of nondiscrimination. Al Josen and his deplorable “black-face” renditions notwithstanding, why would a white person want to pose as an African-American?

Rachel Dolezal, whose job applications claimed African ancestry, was the head of the Tacoma, Washington chapter of the NAACP until her parents disclosed that their roots were mostly northern European. Dolezal might not have the “one drop” of “Negro blood” that would render her black. Her deer-in-the-headlights response to the question, “Are you African-American?” was “I don’t understand your question.” Was her assertion that she was African-American a convenient lie to cover up her inconvenient genes?  Finally, wasn’t her “passing” for African-American risk-free? She can now go back to being white.