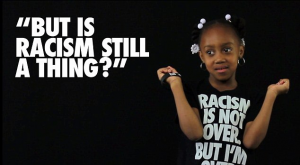 A few months ago, while my white hairdresser skillfully styled my very African-American hair, we casually chatted about my book and a not-so-casual topic: the history and persistence of American racism. She is one of the most perceptive, well-read, and clear-thinking people I have ever met. As she set my hair in rollers, this is what she said:

The United States has yet to come to terms with the reality that our social systems are built on a history of slavery. While we acknowledge that there were black Africans who were slaves, and white Europeans who were masters, we deny that society is influenced by this today. White America still denies that slavery is a shared history, because to admit that we are connected to the horror inflicted upon millions of human beings would be a simple truth that is too hard to accept. White Americans tell themselves what psychologist Daniel Goleman has termed “vital lies,” which are attempts to protect an image that would suggest American society has moved beyond slavery. Even though slavery was abolished in 1865, and the Civil Rights Acts of 1965 made strides in erasing the overt discrimination that remained, racism still exists as denial by white America to accept a shared African American ancestry rooted in the institution of slavery.

Denial of racism continues to manifest through a written history that only reinforces the illusion that America has moved beyond slavery and racism. There exists another history: the oral history maintained within African-American culture. This is not acknowledged by white America, because it is not a written documentation; it is oral. If white America were to acknowledge the oral history of African Americans as legitimate, it would mean accepting painful truths. Rather than look at the truth of how we came to share common ancestors—through rape and violence—we continue to tell “vital lies” designed to maintain our image as a nation that is not racist in its institutional practices. The problem remains: This is an image that white America has created but African Americans must exist within. As long as we continue to place parameters around the history that we teach our children, and only accept part of the story while denying the rest, then we will continue to have inequities and conflicts along racial lines in American society.

Later, I asked my hairdresser if I could include these words in my blog and how I should attribute them to her. She said, “Just call them the opinion of a concerned white woman.”

I miss our conversations. She is now my former hairdresser. While putting two of her three children through college, she, too, was earning a bachelor’s degree. She graduated at the top of her class and now works as a child advocate.