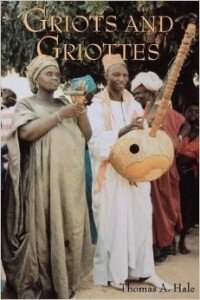 Griots And Griottes
(book and image by Thomas A. Hale)

In West Africa, its history written in its own languages is relatively new. African history was written in European languages during the colonial era, and in Arabic for centuries. But well since before that, in communities in the Sahel and Savanna regions, the griots (men) and griottes (women) have spoken, from memory, epic-long histories and genealogies that often take days to recite.

African “Wordsmiths”
For hundreds of years, possibly beginning before the birth of Christ, the griots and griottes have served as human links between past and present, speaking the stories of their ancestors and the history of their people—births and deaths, conquests and defeats, plenty and famine, tales of vast empires and tiny villages, exploits of nobles or heroes or commoners—all to preserve not just a family or a community but an entire culture and its values. In Africa, this role, unique to that continent for centuries, now adopted, to various extents, by countries around the world, includes many diverse responsibilities: not just oral historian and genealogist, but also teacher, spokesperson, exhorter, interpreter, poet, storyteller, diplomat, adviser to nobility, family counselor, judge, messenger, master of ceremonies, praise singer, and musician, to name just a few.  As Thomas A. Hale states in his book, Griots and Griottes: Masters of Words and Music, “No other profession in any other part of the world is charged with such wide-ranging and intimate involvement in the lives of people.” These “wordsmiths” are the “social glue” of the community. Their words, and the complex layers of meaning behind their words, influence how each person views himself in the present and within the continuum of the distant past and the unknowable future. Griots and griottes, considered by West Africans as being fundamentally different from all other human beings, are not religious icons, nor are they sorcerers, but they hold an aura of power and mystery that is at once revered and frightening. Nearly omniscient, the wordsmiths can sing ones praises… or ones doom.

The Voices of African Women
This important role is inherited, and training begins at home. Trainees then advance to special schools, and then to apprenticeship with master griots and griottes. Young griottes may have less freedom to travel and train because of family obligations, but even in patriarchal West Africa, they learn to speak up in order to encourage, comfort, and empower women. The saabi, a poetic narrative form that West African women sing, often challenge male superiority. Hale’s colleague, Aissata Sidikou-Morton, a native of Niger, has written down the songs of griottes in order to preserve them and so that the world can know the voices of African women.

“In African literature, orality is still the most important form of literature on the continent,” Sidikou-Morton says. “If you compare the oral literature here to the literature of other women in other cultures, you will see similarities. They are saying the same things about what it is like to be a woman, to be a human being.” http://news.psu.edu/story/140694/2002/05/01/research/keepers-history

A favorite theme of the songs of West African women is their relationships with husbands and in-laws. When a woman is to be married, griottes sing to the bride-to-be to prepare her for her new life and for the trouble she might encounter in her marriage, and to reassure her that she can always come back home.

An American Griotte
In America, before the Civil War, slave owners successfully abolished many African traditions, but the tradition of oral history survived the Middle Passage, and then thrived in the New World. I am the eighth, and newest, in the line of griots and griottes in my African-American family. Without this tradition, I would not know my family’s story–from freedom in West Africa, to enslavement, and then emancipation, in America. I hope I am the griotte my family, especially the women, deserves.