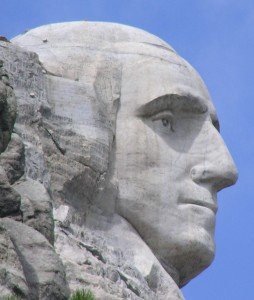 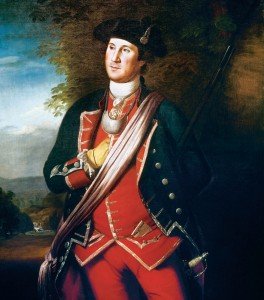 This is the earliest authenticated portrait of George Washington. It shows him in the Virginia Regiment colonel’s uniform he wore during the French and Indian War. The painting hangs in the Washington and Lee University in Lexington, Virginia.

George Washington was an ambitious young man who proved himself to be a military prodigy. At age 20, he became a major in the Virginia military. In 1853, at age 21, he confronted the French in the Ohio Valley in order to support Virginia’s claims to the land. And when the French and Indian War broke out the following year, Washington was already a lieutenant colonel. This war, which became Washington’s training ground, started as a struggle for control of the Ohio River Valley.

Native Americans, primarily the Seneca, the Lenape, and the Shawnee, inhabited the valley and aimed to maintain their land and their way of life. Though they sought trade with the French and the British, the indigenous people did not want European-American settlement.

French people living in North America depended on trade with Native Americans. Though the French were not interested in settling the Ohio River Valley, they wanted authority over it, claiming valley as theirs.

Meanwhile, the rapidly growing populace of the British colonies relied on farming and would soon need more land. Although there were no British settlers in the Ohio River Valley in 1750, the colonies also laid claim to it. In 1754, Washington traveled to the valley with the Virginia militia. Their assignment was to confront the French and to take the “Lands on the Ohio; & the Waters thereof.”

As Washington and his men approached the French fort, a lookout spotted them. A shot rang out. Washington ordered his troops to fire back. These were the first shots of what was to become the French and Indian War.

Throughout the war, Washington impressed the British generals, but in their eyes, no colonial was worthy of a commission in the Royal Army. This snub instilled in Washington a lifelong resentment of the British and fueled his eventual military leadership against them.

The outcome of the French and Indian War, ignited in part by Washington’s retaliatory actions at the French fort, affected all three powers. France lost all of its territories in North America. Britain became the most powerful European country on the continent.

And the Native Americans, devastated by a war in which the enemy used artillery, starvation, and an unimaginable weapon—smallpox—faced an onslaught of settlers into the valley. The Ohio River Valley Indians lost their land and had no choice but to move out, to less habitable territories, where they tried to hold on to their way of life.