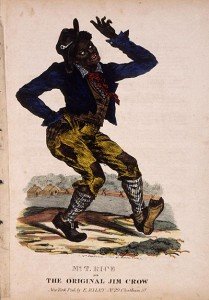 Cover to early edition of Jump Jim Crow sheet music
Thomas D. Rice is pictured in his blackface role; he was performing at the Bowery Theatre (also known as the “American Theatre”) at the time. This image by Edward Williams Clay (1799-1852), published by E. Riley, New York, was highly influential on later Jim Crow and minstrelsy images.

After the Reconstruction period (1865 to 1877), Jim Crow laws (1890 to 1965) terrorized and oppressed black citizens in the South. The most effective and far-reaching laws were those that ignored the 15th Amendment to the United States Constitution–the promise that all citizens have the right to vote. Many southern states disenfranchised African Americans, Native Americans, and poor whites with literacy tests, property requirements, and poll taxes. But black citizens were the primary target. A variety of methods, including gerrymandering, fraud, and violence—in which hundreds of African Americans were murdered—were used to silence the black political voice.

One of the most long-lasting means of restricting voting rights was the use of poll taxes. Alabama, Florida Tennessee, Arkansas, Louisiana, Mississippi, Georgia, North and South Carolina, Virginia, and Texas (and some northern and western states, too) required would-be voters to pay between $1.00 and $2.00 – a lot of money back then, and a significant barrier to the poor.

The United States Supreme Court affirmed the use of poll taxes. In 1937, in Breedlove v. Settles, the Court ruled that poll taxes were constitutional. The ruling stood for twenty-seven years. Finally, on January 23,1964, Congress invalidated the Supreme Court decision with the ratification of the 24th Amendment to the Constitution. It states:

The right of citizens of the United States to vote in any primary or other election for President or Vice President, for electors for President or Vice President, or for Senator or Representative in Congress, shall not be denied or abridged by the United States or any State by reason of failure to pay any poll tax or other tax.
President Lyndon B. Johnson  praised the amendment as a “triumph of liberty over restriction” and “a verification of people’s rights,” and on August 6, 1965, he signed a Voting Rights Act. 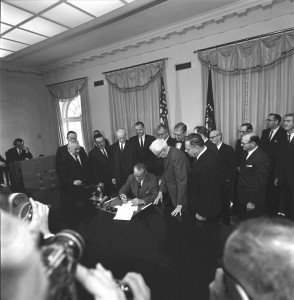 In the 1966 case of Harper v. the Virginia Board of Elections, the Supreme Court overruled its Breedlove decision, thus extending the prohibition of poll taxes to state elections. The ruling declared that the imposition of a poll tax violated the Equal Protection Clause of the 14th Amendment to the U.S. Constitution. The Harper ruling relied on this 14th Amendment clause, rather than on the supposedly unequivocal right to vote provided by the 15th Amendment.