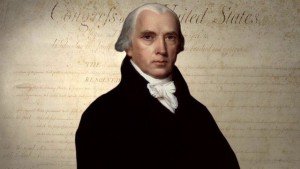 President James Madison did not have children with his wife, Dolley. This widely accepted fact has led scholars to believe that this great historical figure was either impotent, infertile, or both. The oral history of my family says that the scholars are wrong.

Madison loved his fledgling country and embraced its ideals. He was gifted with prodigious intellect and, as one of the Founding Fathers, brought that love and those ideals together to help build a nation he dreamed would become the envy of the world. In spite of his dedication to his country and in spite of the power of his mind, he unwittingly sabotaged America’s image both abroad and within his beloved homeland, in his time and in ours. In 1787, at the Constitutional Convention, Madison and the other southern delegates worked hard to include in the Constitution provisions that supported the “peculiar institution” of slavery.

One decade after the convention, Madison again sabotaged his ideals, this time in his personal life. He participated in a monstrous “institution,” the carnal use of enslaved women. A Founding Father of our nation, James Madison, Jr., was also a Founding Father of my African-American family.

My earliest recollection of hearing the name James Madison was as a five-year-old, trying to stand still while my mother made dresses for me. It was excruciating. The closer the dress came to its final shape, the closer I came to driving my mother to her wits’ end. She thought her balm of telling family stories would stop my whining and squirming, but when that failed, Mom would throw up her hands and say, “Please, Bettye, always remember—you’re a Madison. You come from African slaves and a President.” This admonition guided my family through slavery, Reconstruction, and Jim Crow. It now guides us through the challenges of being an African American today.