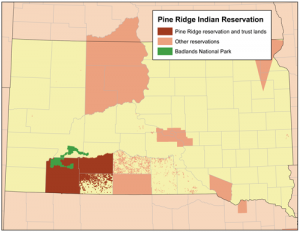 Map of The Pine Ridge Indian Reservation,
by Kmusser 3/19/08

Some say that the recent epidemic of suicide among Oglala Lakota youths living on the Pine Ridge Reservation in South Dakota results from cyberbullying. In the first 110 days of 2013, 100 youths, including a 6-year-old, attempted suicide. By the end of the year, five adults and children had killed themselves. And from late December 2014 through February 2015, more than 100.young Lakota tried to take their own lives. Nine, between the ages of 12 and 24, succeeded. Though cyberbullying affects young people throughout the U.S., the rate of suicide and attempted suicide on the reservation is nearly 10 times the national average. Sometimes, emergency medical workers are called to the scenes of suicide attempts several times a day. Something more than the Internet is leading these young Lakota people to believe that their lives are not worth living. History, I believe, plays a major role.

When speculators discovered gold in the Black Hills in 1874, the federal government breached its treaties with the Lakota and forced the tribes to leave their sacred lands and to relocate to reservations. In December 1890, the 7th Calvary of the U.S. military killed over 300 Lakota men, women, and children near Wounded Knee Creek on the Pine Ridge Reservation. 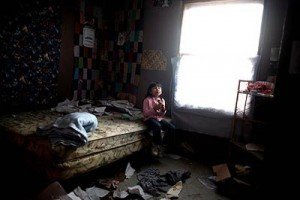 Today, 125 years later, the massacre remains a multigenerational trauma, and the children are the most vulnerable victims. Not only do they face the legacy of oppression, forced removals, and systematic attempts by the U.S. government to destroy the Lakota language, culture, and community, the children also confront extreme poverty, poor schools, ridicule and insults by outsiders, and the daily specters of domestic abuse and alcoholism at home and violence on the street. Death is part of their everyday lives. In the Western Hemisphere, only Haiti has a lower average life expectancy. Pine Ridge has one hospital for the ~40,000 people who live on the 3,468 square-mile reservation. And there are only six mental health providers for both adults and children.

The grandfather of a twelve year old suicide victim stated: “Our kids today just want to die because they’re sick of all this oppression.”