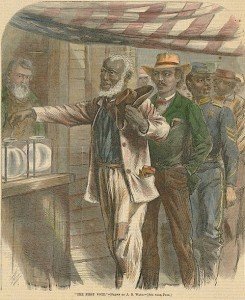 Following the passage of the Thirteenth Amendment, emancipating all slaves in the United States, and the Fourteenth Amendment, granting them citizenship, Republican congressmen worried that the Democrat-dominated South would gain control over the legislature. The Three-Fifths Compromise was now null and void. Most of the four million former slaves remained in the South, and each would be counted for representation in the House. Lincoln’s party, the Republicans, aimed to compensate for its disadvantage by attracting and protecting the votes of the new black citizens.

A suggestion to ban voter restriction on the basis of “race, color, nativity, property, education, or religious belief” was rejected, as was a proposal to ban literacy tests. A House and Senate committee presented a more moderate proposal to their respective chambers. It stated:

Section 2. The Congress shall have power to enforce this article by appropriate legislation.

This proposal does not mention literacy tests, poll taxes, or any other means of restricting voting, nor does it guarantee the right of African Americans to hold public office.

House of Representatives approved the amendment on February 25, 1869, and, on the following day, the Senate voted affirmatively. In both houses, the vote was along party lines, the Republicans “Yea,” the Democrats “Nay.”

State ratification took nearly a year. When it came to allowing black people to vote, northerners were, in general, as opposed as southerners. The Fifteenth Amendment was ratified February 3, 1870 and adopted on March 30, 1870. President Ulysses S. Grant stated, “[it] completes the greatest civil change and constitutes the most important event that has occurred since the nation came to life.”

Thomas Mundy Peterson became the first black voter when he cast his ballot in the mayoral race in Perth Amboy, New Jersey on March 31, 1870. But, almost immediately, black suffrage was under siege.