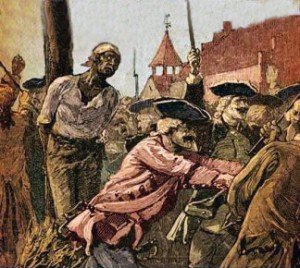 New York City,1741. Slaves being burned at the stakes

The first recorded slave revolt in the British colonies occurred in September 1663. The property-owning citizens of Gloucester County, Virginia were terrified when they learned that a large number black slaves and white indentured servants had planned a revolt against their masters. The plan was discovered, and several rebels were beheaded.

In 1739, some eighty armed slaves attempted to march from Stono, South Carolina to Spanish-occupied Florida. When confronted by a group of white militia, the slaves fought back. Forty-four blacks and twenty-one whites died.

There were other smaller revolts throughout the colonies, and slaves in the North were no less discontent. In New York City, in 1712, twenty-five slaves, armed with clubs and guns, burned down the military barracks, the governor’s mansion, and several other houses. They murdered nine whites. Soldiers killed the rebels. Again, in 1741, slaves set a series of fires in lower Manhattan. White New Yorkers hunted down and captured nearly every black male over age 16. Eighteen were hanged; thirteen were burned alive.

So, fearing slave rebellions, the authors of the Constitution were careful to include means of suppressing uprisings. Article I, Sections 8 declares that Congress shall have the power to:

To provide for calling forth the Militia to execute the Laws of the Union, suppress Insurrections and repel Invasions;

This congressional authority is re-enforced by Article 4, Section 4:

The United States shall guarantee to every State in this Union a Republican Form of Government, and shall protect each of them against Invasion; and on Application of the Legislature, or of the Executive (when the Legislature cannot be convened), against domestic Violence.

The Privilege of the Writ of Habeas Corpus shall not be suspended, unless when in Cases of Rebellion or Invasion the public Safety may require it.

Still, people in bondage continued to revolt until the end of the Civil War. The most successful rebellion was led by the literate slave-preacher Nat Turner. In 1831, he and 80 followers rampaged through Southhampton County, Virginia, killing every slave-owning white in their path. Militia and white vigilantes retaliated, slaughtering hundreds of blacks. Turner was eventually captured, hanged,and skinned.