Two black women wrapped in threadbare coats stood silently near the intersection. Framed by a wall concealing a private tennis club, they stared into the street, ignoring the chilly morning air and the dry leaves swirling about their ankles.  One woman was probably in her 40s, the other, at least a generation older.

I had just pulled up to a traffic light near a mass-transit stop in a well-to-do suburban neighborhood where I had often seen black maids on their way to work. What drew my attention to these two maids was the longing and determination in their faces. They stood there, I felt, not only to survive, but also to create opportunity for their offspring. For me, they were testimonies to the generations of black maids whose labor had not only fed and clothed their children and grandchildren but had also pushed open doors a little wider for all who followed.

These two women, whom I would never know, reminded me of stories about my great-grandmothers, both former slaves. When my mother’s maternal grandmother, Betty, was freed, she turned her back on cotton fields and took in laundry so that her ten children could attend college. My mother’s paternal grandmother, Martha, scrubbed floors so that her daughters and granddaughters would not have to get down on their knees to do the same.

My grandmother, and then, my mother became teachers.

I was in college when the Civil Rights Movement swept the country. One outcome of the nonviolent freedom marches, boycotts, and sit-ins—often answered with violent billy club beatings, fire-hose water lashings, arrests, and murders—was that more black women saw the opening of doors to a broadened array of careers and interests.

Although my grandmother, my mother, and I were blessed, too many black women were not able to elude the life of a domestic servant and its associated cultural assumptions, in part because of the pervasive appeal and conjecture that the proper role for a black woman is that of the Mammy. 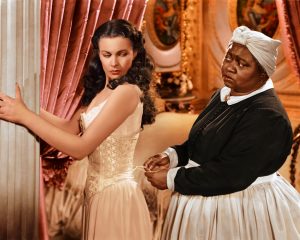 Hattie McDaniel in “Gone with The Wind”

An image from the antebellum era, Mammy remains one of the most persistent and popular American totems of black women. Mammy is remembered as a middle-aged or old, overweight, dark-skinned, sexually unappealing woman who constantly grins and is so loyal that she loves the master’s family more than her own. This stereotype is a distorted caricature. The historical Mammy comprises individuals of varied ages—some were even adolescents. She is seldom obese—food rations for slaves were often sparse. She is seldom dark-skinned—light-skinned slaves (often the product of a master’s sexual indiscretions) were favored as house servants. The real Mammy seldom grins—her life, restricted and uncertain, was too daunting.  She could lose her family on a master’s whim.

The most complicated myth of all is that Mammy was not sexually appealing to white men.  It was quasi-acceptable for a master to sexually violate a black maidservant. She was, after all, his property, to be used according to his liking. 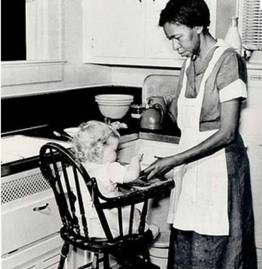 The black woman’s role in “The Big House” is ingrained in the American psyche. According to this imposed legacy, the black maid, heading for the other side of town, meets Mammy at the bus stop. Mammy climbs on board with her, and en route, settles in. 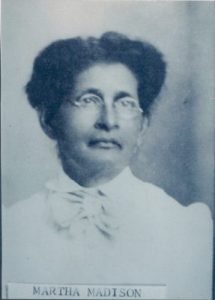 But when I see these black women early in the morning, they bring to mind the resolve of my great-grandmothers to keep their daughters and granddaughters off their knees, out of the fields, away from the white woman’s kitchen and laundry basin, and beyond the “master’s” reach.  Out of gratitude and respect, I call these maids Mammy Warriors.